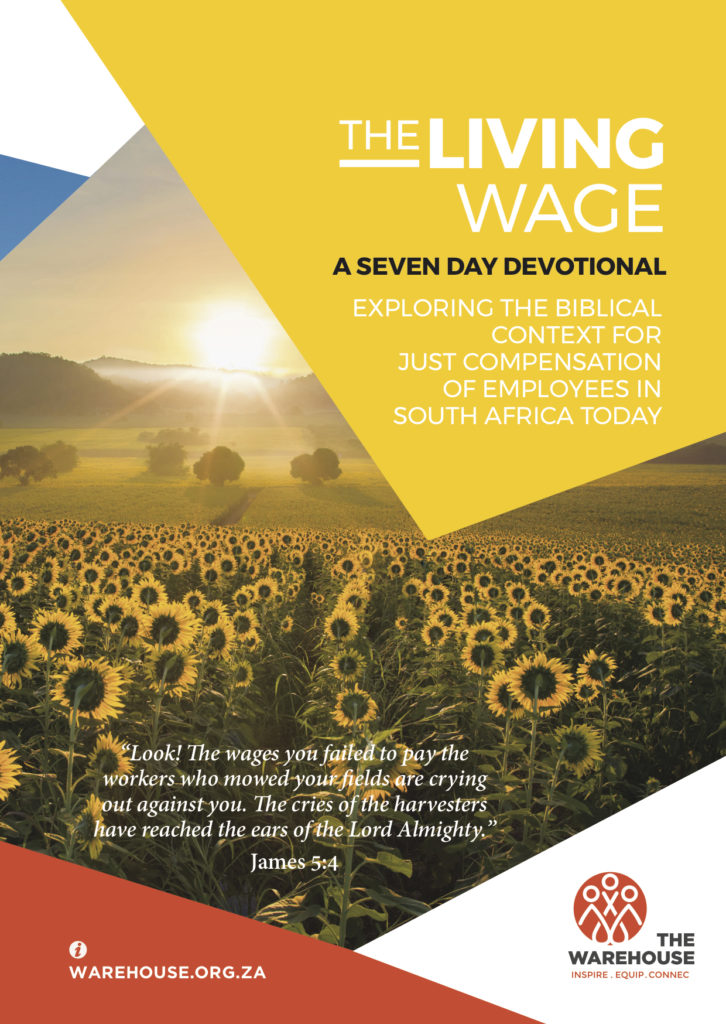 The Living Wage: A seven-day devotional

Children Church and the Law

When the doorbell rings

Restored – A journey through Joel

Many people in South Africa are paid much less than a living wage and the negative impact of this is massive.

Many years ago Dan Ndzuzo and I managed a small employment/job readiness project through our church (Khanyisa Community Church) in Gugulethu. We had the privilege of walking alongside people who were seeking work and connecting these job-seekers with opportunities. One of the painful aspects of the work that changed my life was listening to men and women sharing stories of exploitation and racism, sometimes covert and other times overt, stories that opened my eyes to the ongoing suffering and immoral treatment of domestic staff in South Africa. Some of the stories were from homes that were clearly Christian in their beliefs. We reflected on homes that had ‘missions jars’ for children to give some of their pocket money to foreign missionaries, while domestic staff were being paid just enough to pay for transport, food and the most basic of shelter, and were clearly struggling to make ends meet.

I started to ask questions like, “If we truly believe all people are equal, surely how we treat staff should reflect that?” and “How can Jesus followers who are called and motivated by the call to love our neighbours, be a part of a system that is clearly exploiting others?” and “If the Bible is so clear on its command not to exploit others, why is it so rife amongst Christians in South Africa today?” and “What is lacking in our theology that allows for seeing people struggle and suffer under the burden of poverty and inequality within our immediate sphere of influence?” and “If I truly saw my staff as equal as a human being, would I be able to watch them leave work in the pouring rain knowing they would arrive home drenched a few hours later?”

My questions remain, because the status quo remains largely the same 15 years later.

If we truly believe all people are equal, surely how we treat staff should reflect that? and How can Jesus followers who are called and motivated by the call to love our neighbours, be a part of a system that is clearly exploiting others? – Linda Martindale

And as we face a growing hopelessness, anger and discontent amongst young people, I think about how many young South Africans have seen their parents come home after a long tiring day, and hours in public transport without much to show for it. Young people who have seen the ‘junk’ passed on by their parent’s employers. Who have not had their parents at home because they work long hours and then make the long journey home. Who have heard story after story, as Dan and I did with Jobnet, of racism, be it of the ‘polite’ kind or of the more obvious kind, from their parents. Or who have seen the effects of the status quo and system that does not honour their parents. I think of James 4 which says, “The wages you failed to pay the men who mowed your fields, is crying out against you.”

In our unequal society with our history, I believe it is very important to continue to employ people, although some would argue it perpetuates the current system. Many people have few employment choices due to our past. But as we seek to bring about structural change and ensure that fellow citizens have greater options as they consider life vocational choices, there are things we can do immediately to limit the daily damage. I believe it is imperative that Christians act immediately on the call of God to not exploit, to serve those who have been treated as ‘lower than’ in ways that show they are truly equal, and this requires going above and beyond what is comfortable as the scales have been tipped immorally for so long. It is imperative that workers (whether permanent or ad hoc) are paid a living wage, which is more than double the minimum wage, and are paid for leave to rest well, or paid if the weather is bad (many men who work in the garden on an ad hoc basis are not paid if it is raining and they are unable to work).

Author and Editor of The Living Wage – A Seven-Day Devotional, Exploring The Biblical Context For Just Compensation of Employees in South Africa Today