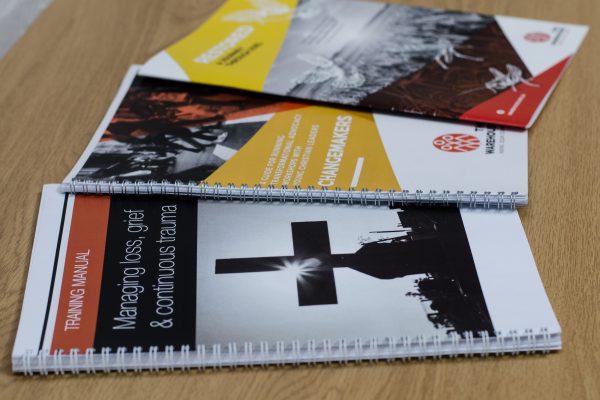 Sinoxolo (“we are at peace”) is a programme run by The Warehouse for local churches that helps participants better understand and manage themselves and support others in their experience of loss, grief and continuous trauma. The course has had very positive results, not only in people handling their situations, but also in how God has intervened in their lives. The course consists of five to six sessions during which participants share stories, get some teaching on the effects of trauma and the possibility of hope, read scripture together and pray for one another. I’d like to share some stories from last year’s courses in one of our local townships. The names of those involved have been changed.

The first course, in June, had to be aborted midway due to several factors that only served to highlight the dire situation in which people are living. These included a roof blowing off, people having the flu, and numerous visits to the day hospital, police station, or municipal offices. I’d like to share the story of one of the women attending that course, and what has happened since.

Shortly before the course started, Katherine’s youngest daughter was a witness to murder when her boyfriend was shot and killed right next to her. Katherine described the stress of her daughter being in hiding and having to move from house to house so as not to be found by the killer’s fellow gang members, knowing also that even if the chap were convicted and jailed, she would still be in danger as his comrades sought revenge. In addition to this, Katherine’s husband, who suffers from schizophrenia, had recently suffered a bad psychotic episode resulting in her having him admitted to the psychiatric ward at Victoria Hospital. These issues received much prayer.

After the course was aborted I took Katherine out for tea to see how she was doing and to discuss the possibility of resuming the course. I found her joyful and light-hearted. Regarding her daughter, she told me that the trial of the boyfriend’s killer was off because this chap himself had been shot. Though not dead, he was paralysed and unable to speak, hence no longer fit to stand trial. Her daughter was now back home. Katherine’s husband was back home too, stable, on new medication, and being very well monitored by the local clinic. While she was telling me this her cell phone rang. I heard her telling the person on the line the same story she’d just been telling me about her husband. After the call she said, “That was the sister from Victoria Hospital, just phoning to find out how my husband is doing”.

At a time when trauma is continuous and all hope seems lost, God shows up in ways we cannot imagine. Katherine committed herself to organising the next course, which started three months later. I helped with the first 2 sessions, after which Katherine took over. I attended the last session to hear their “Reasonable Hope” stories. Here is some of what ensued.

Katherine shared that a young man had come to her door to inform her that he had been appointed by his gang to “take out” her daughter. “But,” he said, “Your family has always been so good to us, always helping us, that I could never do that. I just needed to tell you.” She said that they hadn’t had a problem since then.

Mary-Anne’s daughter was on drugs and had gone and left her children in Mary-Anne’s care. Applications for a foster care grant were getting nowhere and Mary-Anne was at her wits end. The day after she shared her story and the group prayed for her, she received a call from social services to say her grant had been approved.

Nomsa told of the day a neighbour came to her house in deep distress. She sat this woman down and lit a candle (as we do on the course), telling her it represents Christ’s light shining in the darkness. She told the woman to breathe (in the way we were taught). After she’d calmed down, the woman told Nomsa that her niece, who was living with her and who had a new-born baby, had been stabbed to death by her boyfriend who claimed he was not the child’s father. He had now been taken to jail leaving her, the aunt, with this tiny new baby. After Nomsa had listened (using the techniques learnt on the course) and prayed with her, the woman said, “You have really helped me. Even though my challenges have just begun, I feel as if everything has been solved. Thank you.”

Beverley’s street was notorious for fights and arguments of all kinds and Beverley was a notorious busybody, not one to miss out on anything. She used to get right in there when anything was happening, and her house had become something of a public space. This she wanted to change. She reported that she had decided not to go and join the fights, but to stand on her stoep and pray whenever anything was happening, and this is what she had since been doing. She had also declared her house a “house of peace”. In fact this last session was held at her house.

Towards the end of the session a young man wearing a beanie strolled in. Sophia, whose son had been killed two years previously, stood up and said, “Ricardo, what are you doing here? It’s the Lord who has sent you here.” To us she said, “This boy belongs to the gang that shot my son… Ricardo, can we pray for you?” Ricardo nodded, removed his hat and bowed his head while we prayed for him. God revealed to us that he had given this young man a gift of leadership and influence. We declared this over him, praying that he would no longer use this gift to lead others in the wrong way, but to lead them to life.

And so I will continue to run this course in situations like these. And while the things I see and hear often lead me to despair, it is how God returns people’s hope that gives me hope. I was recently reading Psalm 12 and, reflecting on the things that are happening in our country, was struck by the truth of verse 8: “The wicked wander freely, and vileness is exalted among men”. But it is in spending time with, praying with and listening to the stories of men and women who live amidst unspeakable trauma yet hold on to God, that the greater truth of v5 strikes me:

Into the hovels of the poor,

Into the streets where the homeless groan, God speaks:

To heal the ache in the heart of the wretched.”

And also Job 5:16 “So the poor have hope, and injustice shuts its mouth”.

And yet it can only be so if we play our part; if we are willing to be struck to the heart and repent (Acts 2:38) and to say to God (in the words of Isaiah, Hugh Masekela and Cyril Ramaphosa) “Thuma mina,” and then to go and be baptised (immerse ourselves) in the suffering of those to whom God sends us.

Craig Stewart June 1, 2021
PrevPreviousMary and the Slaughtered Sheep
NextHow to stay full of hope in 2019: Twelve ways to make 2019 good for you and your neighbour.Next